As a new Physical Therapist and a long-time yoga instructor, I find that I am incorporating yoga in nearly every treatment session with nearly every patient. How? Not necessarily with downward facing dog or sweaty sun salutations, but with breathing (pranayama), linking movement with breath (vinyasa), mindfulness techniques (today I wrote out a metta meditation on a patient’s home exercise sheet to help guide her through stressful and painful moments), and in quirky ways, truthfulness (satya) — both by asking patients to be accountable to maximizing their heath and being accountable myself for what I know as well as what I don’t know yet.

This week the New York Times depicted one doctor’s approach to using a simple yoga-extracted move to heal shoulders. The move described in the article below is similar to some of the scapular stabilization exercises (essential for ANY shoulder injury or diagnosis) I learned in a weekend-long continuing education class in April with Todd Ellenbecker, DPT, MS, SCS, OCS, CSCS, USPTA, THE physical therapist for the United States Professional Tennis Association. (Ok, I lucked out being able to participate in that one. Thank you Sarah Amesbury!). I wouldn’t say, therefore, that the approach used by the physician below is as revolutionary as it sounds on paper. But good treatment grounded in simplicity and a holistic approach is, unfortunately, not the norm.
Read on and tell me what you think by email or in the comments below. If you or someone you know is in physical pain that can be addressed with physical therapy, don’t hesitate to contact me. If I can’t treat you, I can refer you to additional incredible physical therapists around town.
original link here: http://www.nytimes.com/2011/08/02/health/02brody.html?_r=2&scp=1&sq=yoga%20therapy&st=cse

With the costs of medical care spiraling out of control and an ever-growing shortage of doctors to treat an aging population, it pays to know about methods of prevention and treatment for orthopedic problems that are low-cost and rely almost entirely on self-care. As certain methods of alternative medicine are shown to have real value, some mainstream doctors who “think outside the box” have begun to incorporate them into their practices. 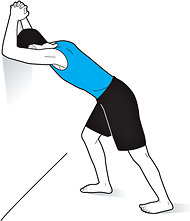 FASTER THAN AN OPERATION The triangular forearm support may relieve shoulder pain in those with injured rotator cuffs.

One of them is Loren Fishman, a physiatrist — a specialist in physical and rehabilitative medicine affiliated with NewYork-Presbyterian/Columbia hospital. Some in the medical profession would consider Dr. Fishman a renegade, but to many of his patients he’s a miracle worker who treats their various orthopedic disorders without the drugs, surgery or endless months of physical therapy most doctors recommend.

Many years ago, I wrote about Dr. Fishman’s nonsurgical treatment of piriformis syndrome, crippling pain in the lower back or leg caused by a muscle spasm in the buttocks that entraps the sciatic nerve. The condition is often misdiagnosed as a back problem, and patients frequently undergo surgery or lengthy physical therapy without relief.

Dr. Fishman developed a simple diagnostic technique for piriformis syndrome and showed that an injection into the muscle to break up the spasm, sometimes followed by yoga exercises or brief physical therapy, relieves the pain in an overwhelming majority of cases.

Nowadays yoga exercises form a centerpiece of his practice. Dr. Fishman, a lifelong devotee of yoga who studied it for three years in India before going to medical school, uses various yoga positions to help prevent, treat, and he says, halt and often reverse conditions like shoulder injuries, osteoporosis, osteoarthritis and scoliosis. I rarely devote this column to one doctor’s approach to treatment, and I’m not presenting his approach as a cure-all. But I do think it has value. And he has written several well-illustrated books that can be helpful if used in combination with proper medical diagnosis and guidance.

For many years, yoga teachers and enthusiasts have touted the benefits to the body of this ancient practice, but it is the rare physician who both endorses it and documents its value in clinical tests. Dr. Fishman has done both. Rotator Cuff Relief

This year, Dr. Fishman received a prize at the International Conference on Yoga for Health and Social Transformation for a paper he presented on a surprising yoga remedy for rotator cuff syndrome, a common shoulder injury that causes extreme pain when trying to raise one’s arm to shoulder height and higher. He described a modified form of a yoga headstand that does not require standing on the head and takes only 30 seconds to perform, and presented evidence that it could relieve shoulder pain in most patients, and that adding brief physical therapy could keep the problem from recurring.

For patients facing surgery to repair a tear in the rotator cuff and many months of rehabilitation, the yoga maneuver can seem almost a miracle. It is especially useful for the elderly, who are often poor candidates for surgery.

Dr. Fishman said he successfully treated a former basketball player, who responded immediately, and a 40-year-old magazine photographer who had torn his rotator cuff while on assignment. The photographer, he said, had been unable to lift his arm high enough to shake someone’s hand.

Instead of an operation that can cost as much as $12,000, followed by four months of physical therapy, with no guarantee of success, Dr. Fishman’s treatment, is an adaptation of a yoga headstand called the triangular forearm support. His version can be done against a wall or using a chair as well as on one’s head. The maneuver, in effect, trains a muscle below the shoulder blade, the subscapularis, to take over the job of the injured muscle, the supraspinatus, that normally raises the arm from below chest height to above the shoulder.

The doctor discovered the benefit of this technique quite accidentally. He had suffered a bad tear in his left shoulder when he swerved to avoid a taxi that had pulled in front of his car. Frustrated by an inability to practice yoga during the month he waited to see a surgeon, one day he attempted a yoga headstand. After righting himself, he discovered he could raise his left arm over his head without pain, even though an M.R.I. showed that the supraspinatus muscle was still torn.

Dr. Fishman, who has since treated more than 700 patients with this technique, said it has helped about 90 percent of them. “It doesn’t work on everyone — not on string musicians, for example, whose shoulder muscles are overtrained,” he said in an interview.

In a report published this spring in Topics in Geriatric Rehabilitation (an issue of the journal devoted to therapeutic yoga), he described results in 50 patients with partial or complete tears of the supraspinatus muscle. The initial yoga maneuver was repeated in physical therapy for an average of five sessions and the patients were followed for an average of two and a half years.

The doctor and his co-authors reported that the benefits matched, and in some cases exceeded, those following physical therapy alone or surgery and rehabilitation. All the yoga-treated patients maintained their initial relief for as long as they were studied, up to eight years, and none experienced new tears.

Perhaps more important from a public health standpoint is the research Dr. Fishman is doing on yoga’s benefits to bones. Bone loss is epidemic in our society, and the methods to prevent and treat it are far from ideal. Weight-bearing exercise helps, but not everyone can jog, dance or walk briskly, and repeated pounding on knees and hips can eventually cause joint deterioration.

Strength training, in which muscles pull on bones, is perhaps even more beneficial, and Dr. Fishman has observed that osteoporosis and resulting fractures are rare among regular yoga practitioners.

In a pilot study that began with 187 people with osteoporosis and 30 with its precursor, osteopenia, he found that compliance with the yoga exercises was poor. But the 11 patients who did 10 minutes of yoga daily for two years increased bone density in their hips and spines while seven patients who served as controls continued to lose bone. He noted that yoga’s benefits also decrease the risk of falls, which can result in osteoporotic fractures.

Medical guidance here is important, especially for older people who may have orthopedic issues that require adaptations of the yoga moves.

Let’s stay in touch! Subscribe to my (once or twice monthly) newsletter for links to fresh blog posts like this one – covering the best of yoga, optimal health, yoga anatomy, physical therapy and the occasional recipe – PLUS amazing upcoming events, like my retreats and yoga anatomy trainings.